I have a long term fascination with the mystic art that is tarot divination, and by long I mean 30 years. Not only does the divination itself hold a firm interest, but the detailed illustrated scenes on each card are also of artistic merit and interest to me.

The illustrated scenes on each individual tarot card within the 78 card deck, are there to assist the tarot reader in remembering the meanings of each card, usually they are highly detailed and depending on the pack and illustrator they can be quite beautifully illustrated scenes.

My Illustration Of The Lovers Card

Below I've taken a photograph of The Lovers tarot card from the mythic tarot deck illustrated by Tricia Newell which is a Major Arcana tarot card that has inspired my own simple and modern illustrated version of 'The Lovers' card.

My own illustration is available in the Taylor Two gift shop as a greeting card (for anniversaries, Valentines and love in general!) and also available on a small hand mirror and as an A4 art print. 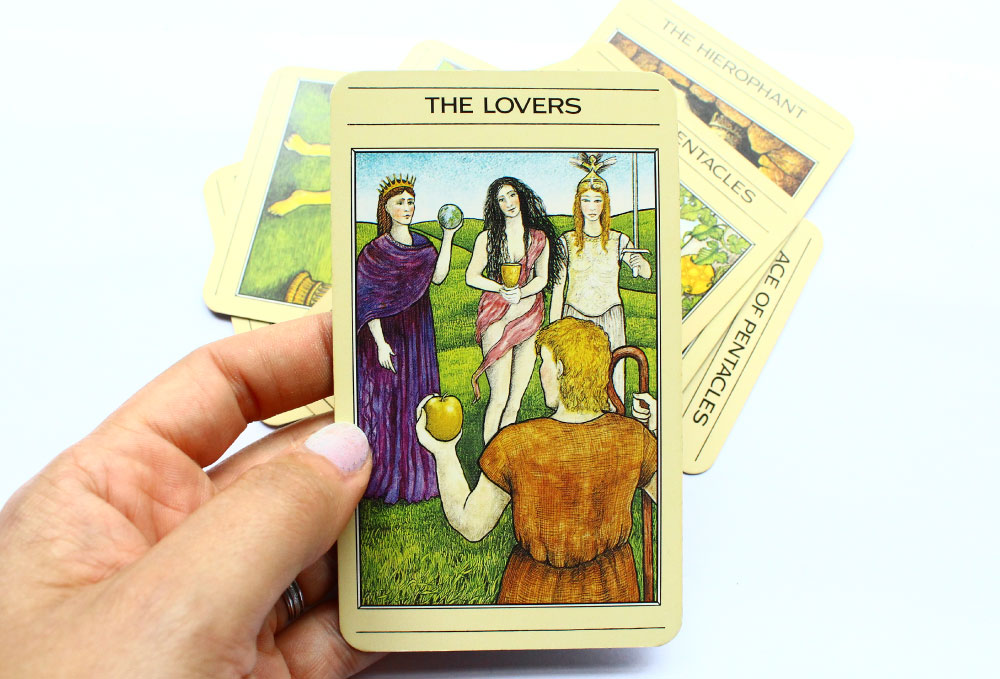 And below is my own modern (and somewhat sexier!) interpretation of The Lovers. The Lovers is a passionate card, and I'll explain more about it's meaning further below.

This below is the art print, and in it's greeting card form it makes a wonderful anniversary card or Valentines card. It would also make a unique card for someone at the beginning of a passionate tryst ... if they could just take their hands off their mobile phone for long enough to stop texting and send something in the actual post instead that is. Oh the romance. 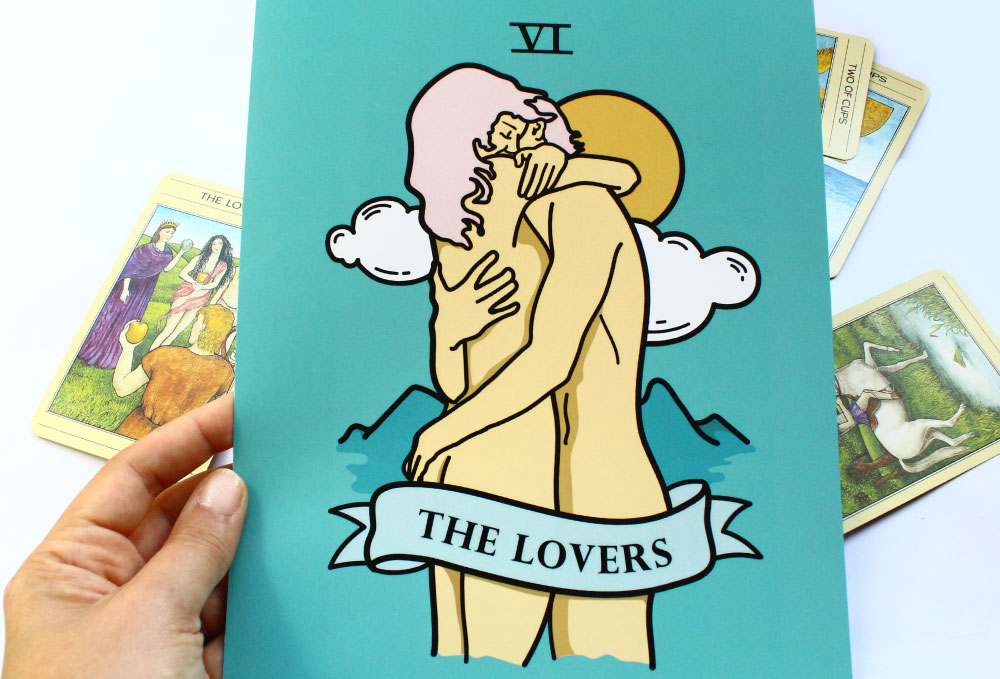 Major Arcana cards such as The Lovers are the most recognised and impactful cards in a Tarot deck; comprising of 22 cards in all they represent major points within one's inner psych and life itself ... each tarot card carrying a strong and specific message. Other cards within the Major Arcana include Death, The Tower, Temperance and The Moon.

All About The Lovers

The Lovers tarot card meaning is of being passionately drawn to something or someone; it represents intimacy (sometimes sexual if combined with other indicating cards), and it also can represent choices or dilemmas in the realm of passion, love and intimacy.

Though when you see The Lovers in a tarot card spread it often does relate to an intimate relationship, it doesn't always have this meaning; in some circumstances, and if the surrounding cards indicate as such ... it can also represent an all consuming passion surrounding a hobby, interest or career.

In most tarot card illustrations of The Lovers there are three parties within the illustrated scene; and this is the choice and dilemma aspect of the card. The man is seen choosing between a prostitute and a virgin, and this represents a well worn choice faced by many people - which is the choice between stability and excitement.

The Lovers is neither a positive or negative card, it's connocations really will depend on which other cards surround it. For instance if next to The Devil card it could indicate that the 'passion' in this instance is perhaps and unhealthy and obsessive passion. If The Lovers is sandwiched between the Ten of Cups and The Empress this would indicate a union between two people that would result in stability and the blessing of children.

Tarot divination is a complex skill, requiring many years of practice.

Below I've showcased my The Lovers illustration on a hand mirror, and further below that some more photographs of the mythic tarot deck, beautifully illustrated by Tricia Newell. I can't believe it's taken me so many years to applaud her beautiful work! I've been using her deck for a good 20 years now.

Note that the background tarot cards in the scene below with the round hand mirror, are cards from the classic Rider Waite deck. Lovely illustrations also, with quite a vintage feel, not surprising considering they are over 100 years old. 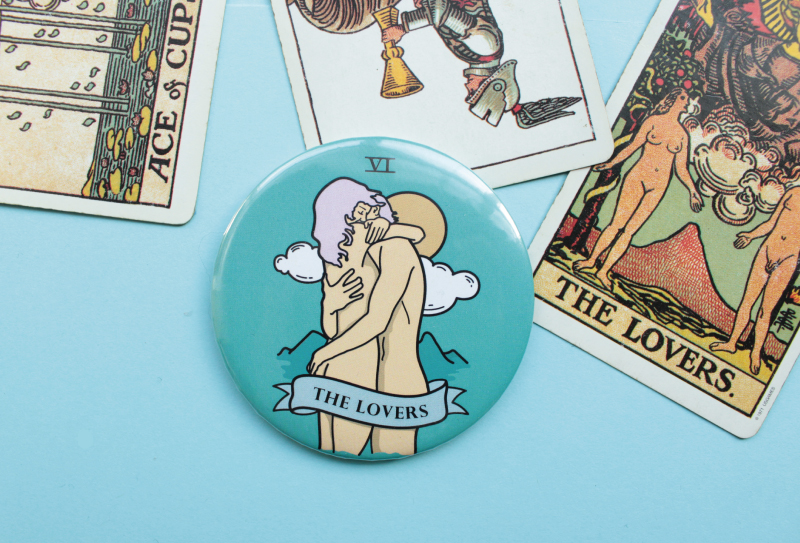 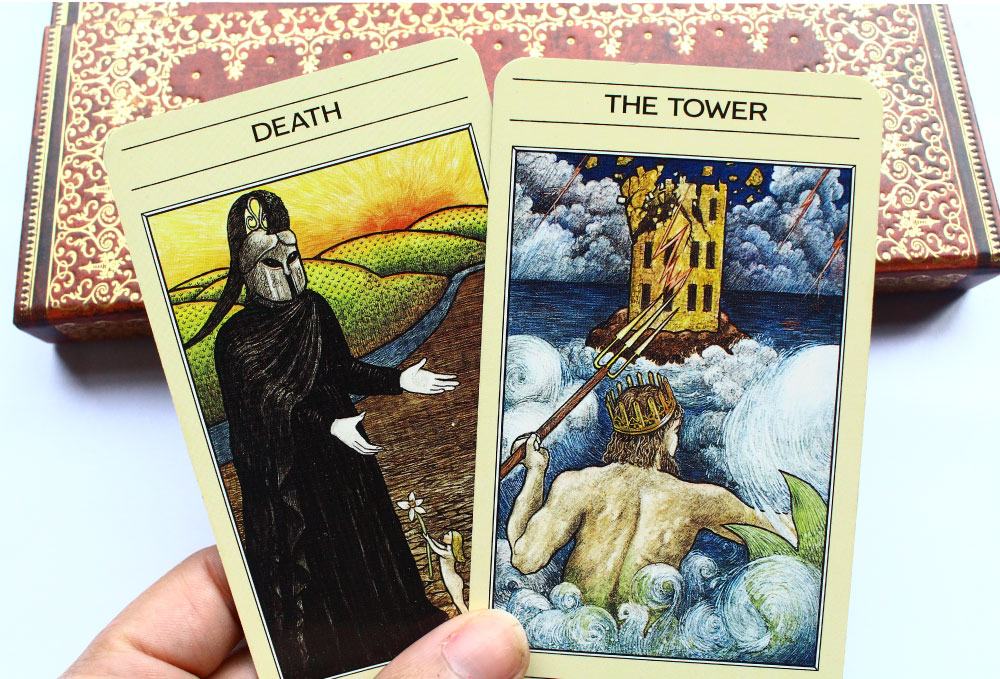 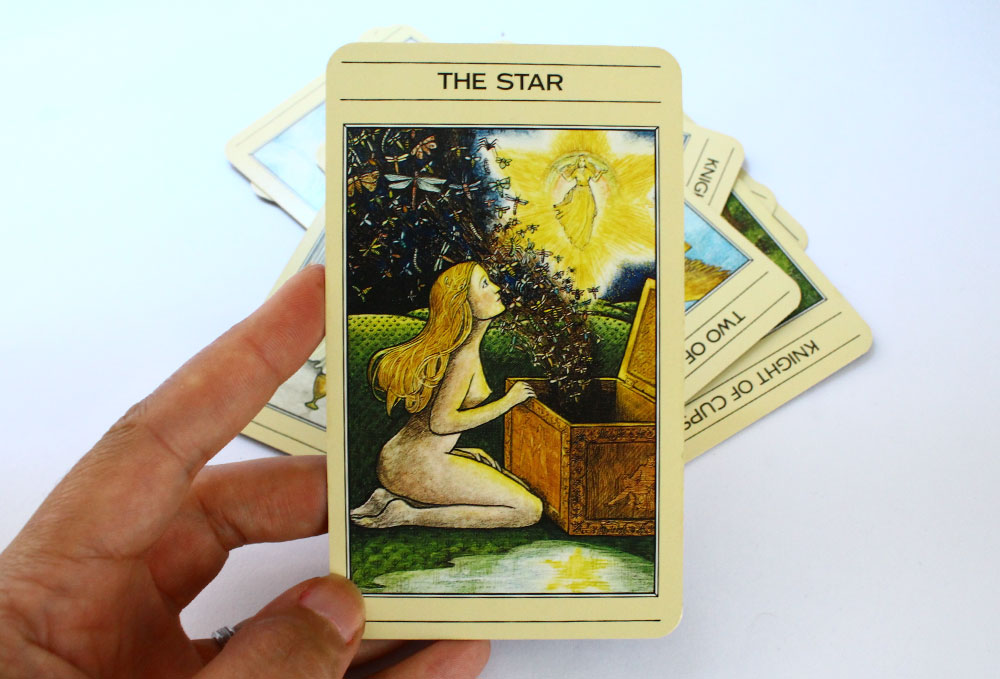 I hope you've enjoyed looking at Tricia's illustrative work as much as I have over the last 20 years, and also hope you have enjoyed viewing my own modern 'The Lovers' illustration, shown in greeting card form below. 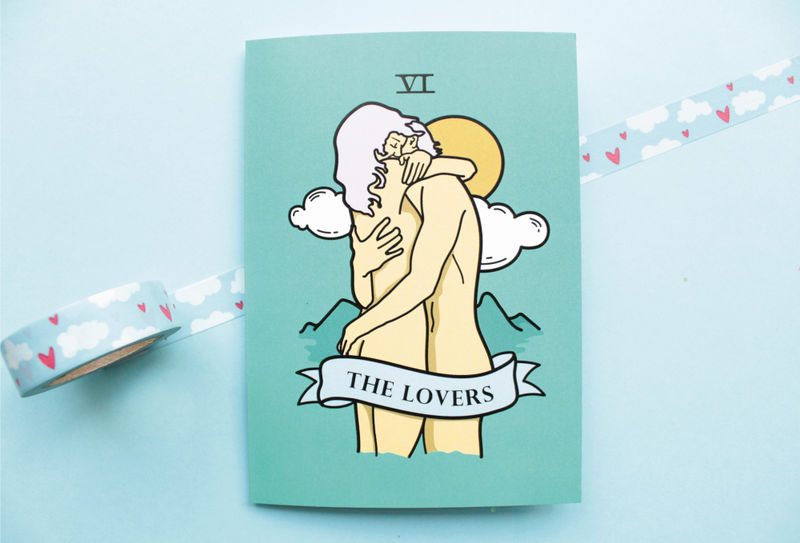