I've taken a shine to the semi precious gemstone white agate, and I  think other people have too. I very recently created a handmade sterling silver and white agate necklace, and it sold within minutes of promoting it on social media.

Below I've shown a photo of the precise sold item of jewellery. The necklace is created with solid 925 sterling silver wire wrapping and a solid sterling silver chain. A quality piece with a lovely shimmery white agate nature semi precious gemstone as the pendant.

Do be sure to also read my important guide "But is it REALLY sterling silver?" 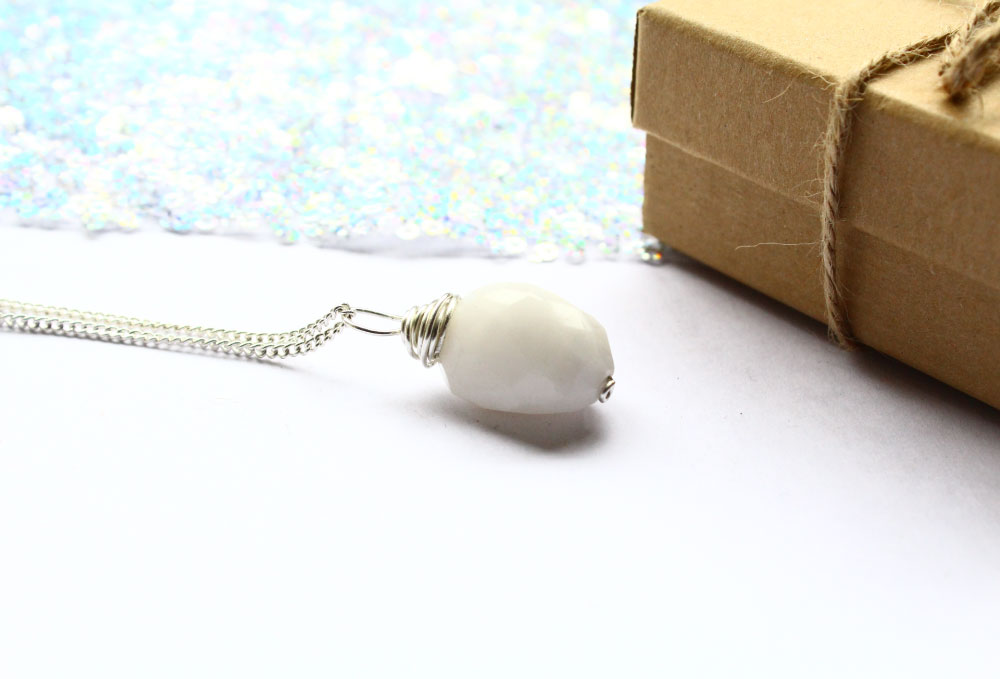 The buyer was purchasing this as a Christmas gift for his mother (awww) and so I asked if he wanted me to bling it up with glitter. I wasn't expecting a no, and so out the necklace went in it's gift box looking like this below, adorned with my favourite glitter. 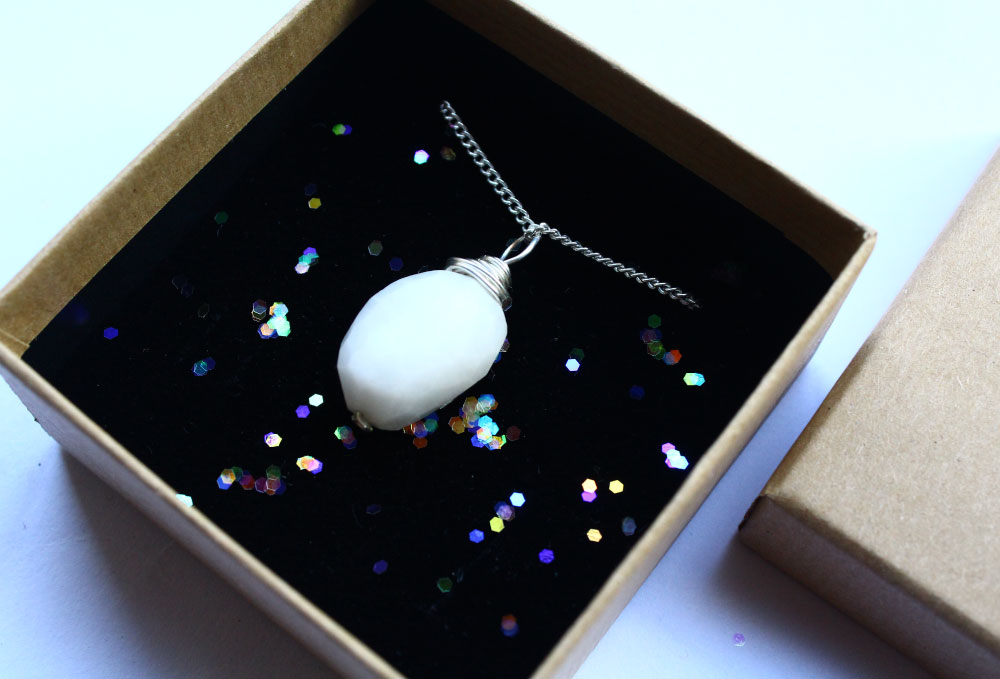 When purchasing this lovely piece of white agate I actually bought two pieces, because even looking at it online I could see that it's a lovely stone and so I felt I might need a back up gemstone to make a second piece of jewellery if the first necklace sold. Turns out I was right, it sold fast and so I was able to make this next piece of jewellery shown below.

With this piece you can see it's the exact same jewellery design but the white agate stone is a different shape. Whenever I make a jewellery piece I always take exact photos of the item you will actually receive. I really don't like the notion of using the same photos over and over and telling customers their item will be 'similar'.

Natural gemstones are so unique I think that customers deserve to see photos of the actual item they are thinking of purchasing. 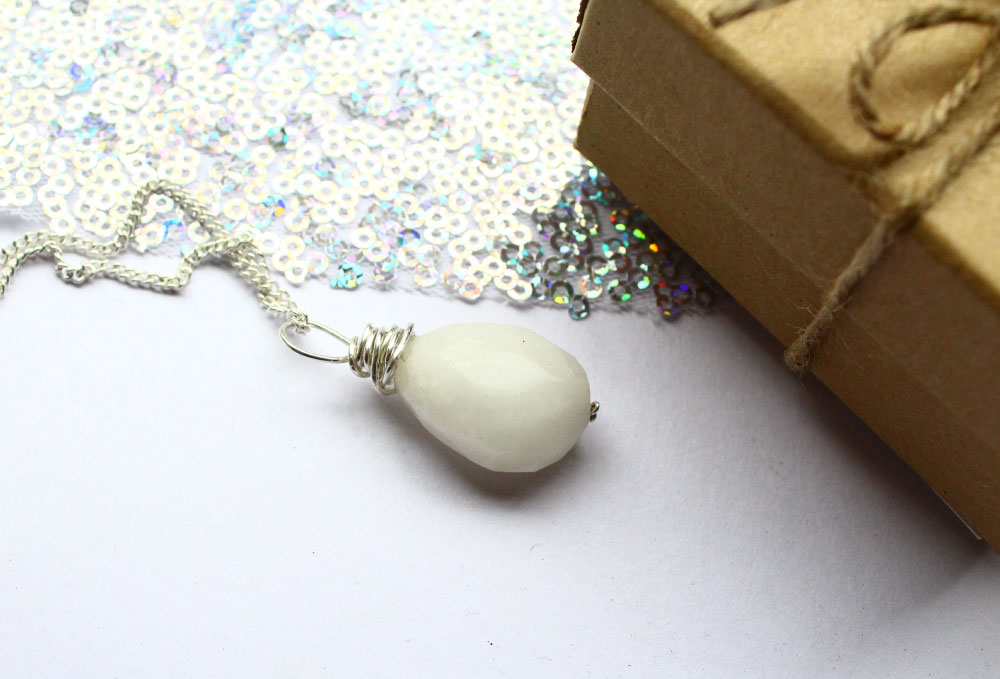 All About White Agate

Agate is a finely grained microcrystalline quartz gemstone from the Chaldedony family, and forms in a range of colours, not just white.

Agate isn't a clear gemstone, you can see that from the photos, and is classed as 'translucent' instead. It's pretty hard as it is a 7 on the Mohs scale, which is a common hardness rating for a Quartz gemstone. The higher the Mohs rating, the harder the stone is ... for example a diamond is a 10 on the scale, and a sapphire is 9, the harder the stone is, the more valuable it tends to be.

Though agate comes in a range of colours naturally, as with many gemstones, it's possible to dye them, and agate that comes from Brazil with more intense neon-like colours such as hot pink, blue and green, is most certainly dyed.

The Power of Agate

As you are probably aware, many people subscribe powers and healing properties to gemstones, and agate is no exception to this.

According to healers, agate is an energising and stabilising gemstone, which will assist in balancing your energies and channelling them where most needed. I also read that agate will simultaneously calm, elevate and uplift a person - can one be calm at the same time as elevated and uplifted? It seems to be Schrödinger's healing stone to me.

White agate in particular promotes peace and serenity, which is not uncommon for white objects and symbols throughout history. White doves for instance. 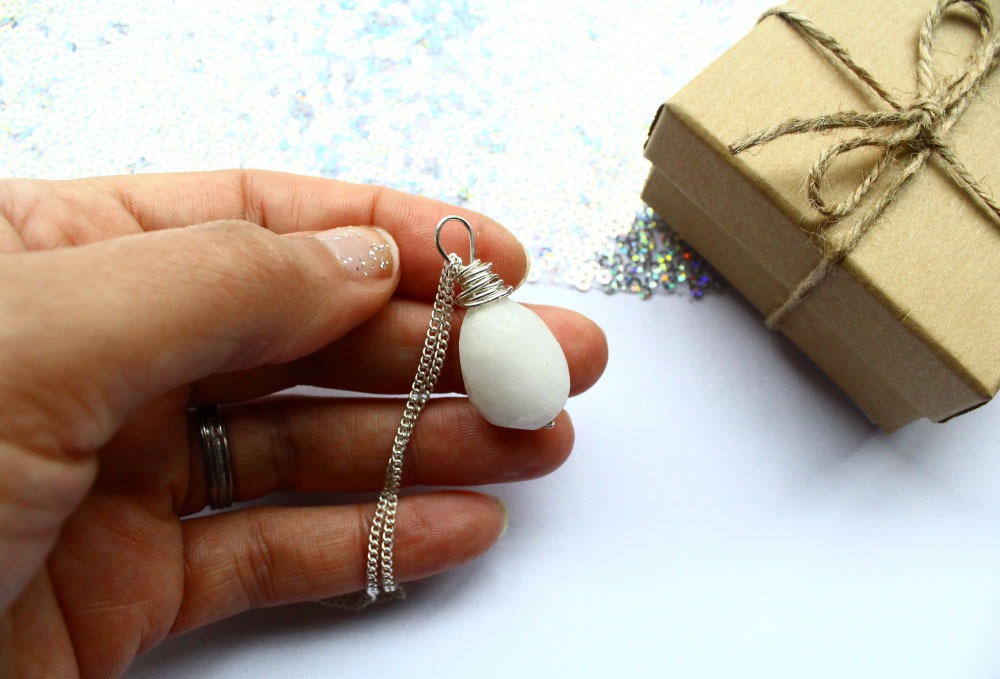